An Olympic debut to remember for South Africa’s Tatjana Shoenmaker

As the Tokyo 2020 Olympic Games came to a close, many athletes were on the world stage at this level for the first time—a lifelong goal for most. Among those athletes was Tatjana Shoenmaker – a well decorated South African swimmer who put it all on the line at her Olympic debut this year.

The breakout star from South Africa took part in the breaststroke swimming events, where in stunning performances she set two new records at the Games; an Olympic record in the 100m with a time of 1:04.82 and a new world record time for the women’s 200m breaststroke in 2.18.95.

The University of Pretoria student and double gold medalist from the Napoli 2019 Summer Universiade has made a remarkable debut at these Olympic Games, with a showing that has astonished the rest of the world. Predominantly a 200m breaststroke swimmer, Schoenmaker and her coaching team were very pleased by her races.

Shoenmaker raced to a new 100m breaststroke Olympic record in heat five of the qualifying round, but narrowly lost gold to USA’s 17-year-old American, Lydia Jacoby, to claim the silver medal.

After silver in the 100m, Shoenmaker went one better in the 200m. USA’s Lily King lead at the halfway turn, but at the final turn Shoenmaker came through strong to win gold to become the first South African at the Games at the top podium—also setting the new world record.

“I feel like it’s just unreal, going into the last turn,” she said. “I saw Lily and she was going fast; it was a battle between us in the last 50m. I was just happy I came in first and when I turned around, I just couldn’t believe it”.

The 24-year-old became the first individual in swimming to set a new world record at the Tokyo 2020 Olympic Games, winning the final of the women’s 200m breaststroke in 2:18.95. She broke the previous record time of 2:19.11 set eight years ago by Denmark’s Rikke Moller Pedersen at the 2013 World Swimming Championships.

Barely able to hold back her joy, Shoenmaker expressed just how surreal the experience was for her. 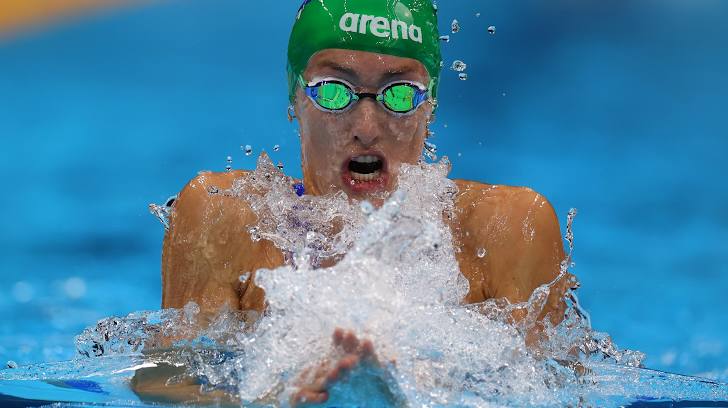 “It still hasn’t sunk in,” Schoenmaker said still in awe. “I don’t wish my Olympic dream over, but I am excited to go and celebrate even just being at the Olympics with my parents. This just makes it very official, it’s just so amazing to be a part of it. I came here and swam my personal best. I can walk away with a bigger smile”.

Going into the Games, Schoenmaker and her coaching team had only hoped to make the final of the races after missing the Rio 2016 Olympic Games—an edition in which South Africa did not send a female swimmer to compete.

With her training centered on getting her in the best condition for the 200m, her coach Rocco Meiring before the start of the Games indicated that the only reason why Tatjana swims the 100 metres is to improve her speed over 200m, also stating that the training for the 200m breaststroke is very different to that of the 100m breaststroke.

Though her world and Olympic records might have come as a surprise to most, Tatjana has been developing at a pace that would gain attention of the world. In 2019, she became the first South African female to win a medal at the FINA World Championships and set a new African and South African record in the women’s 200m breaststroke with a time of 2:21.79.

ALL PHOTOS COURTESY OF REUTERS